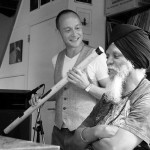 Sometimes opportunity knocks and one has to act with great speed and without reservations. In this case there was a need to visit the Doctor and the outcome of the visit was a nice recipe for a new Jazzinvaders album. The Doctor being none other then the wonderful Dr Lonnie Smith, King of the Hammond Sound and star of the early Blue Note label. Responsible for some legendary recordings with George Benson and Lou Donaldson just to name a few.

Through a connection with the artistic manager of the renowned Jazz Orchestra of the Concertgebouw (JOC) Jazzinvaders had their first meeting with the Doc in july ’12 during the Big Rivers Festival in Dordrecht (The Netherlands). After a short introduction before the gig it was clear that there was a nice ‘click ‘and the crowd responded with great enthusiasm during the show. Right away plans were made to meet again in august when the Doc was coming over to play another concert with the JOC.

So with this plan in mind to record all new tracks featuring Dr Lonnie Smith the Jazzinvaders got to work immediately. New arrangements were made in a very short period of time and a studio session was set up at ‘De Smederij’ studio of Marius Beets (great bassplayer/musician!!!).

Sometimes you know when it is gonna be good ! The prospect of recording as many tracks as possible in three days can be quite daunting. Not in this case!
The studio was oozing with inspiration and booming with some kicking impro’s as the tunes were recorded. It was remarkable how Dr Lonnie Smith had the power to energize and keep a good vibe during the very intense recording sessions.

The opportunity to check out the new tracks with the Doc on stage came when we also played a gig in BIRD Rotterdam on Sunday August 19th. Bird is a wonderful new venue in Rotterdam run by a great music lover/DJ/entrepreneur Phillip Powel. Even though the heat wave was hitting the town and it was almost unbearably hot, The Jazzinvaders and the Doc kicked it again!

Monday the 20th of august 2012 was the last recording date and at the end of this session there was a total of 13 new tracks on ‘tape’. Quite the ‘Olympic’ achievement.

All in all it was one of the best experiences of the Jazzinvaders. We’d like to thank Dr Lonnie Smith for his wonderful, kind en energetic presence, amazing and inspirational Hammond playing and great story telling! We love you Doc!